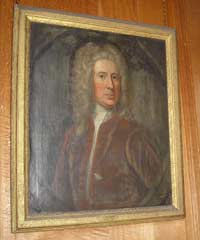 Ardkinglas became the home of a new Campbell line in 1396 when Sir Colin Campbell (brother of Duncan, first Lord Campbell) granted it to his third son Caileen Oig, “that spot known as Ardkinglass, in feu farm, in all its righteous meaths and marches, with the patronage of its churches and chapels, in all its hawkings, huntings and fowlings etc., and that for as long as woods shall grow and waters run from that year to next year and so on for ever”.

The feudal condition attached was the provision by the new family at their own expense of two war galleys one of eight oars and the other of six to serve the Lord of Lochow or the King of Scotland in times of war and tumult. Ardkinglas remained in Campbell hands until it passed to the Callander family through marriage. By the end of the 19th century it was under the control of George and Henry Callander who were deemed to be incapable so Niall Diarmid 10th Duke of Argyll and son of their step sister was appointed their curator. He decided to sell. The following is an extract from a letter written by him in 1905 to the tenantry of Ardkinglas when the estates passed from the Callanders to the Nobles:

“when an estate is so heavily burdened by an accumulation of debts inherited by its present possessor from the unwisdom of their forefathers. A point is ever reached … when the interest on money borrowed can no longer be paid and the lands themselves have to be sold. This in brief is what had happened not only with the lands we speak to you of, but of nearly all the lands which march with Ardkinglass. You will all of you recollect that it was but some 10 years ago that the neighbouring estate of Strachur which (with that of Ardgarten) was held for at least 9 centuries by a branch of our race passed into other hands. Drimsynie, Carrick, Ardentinny and Kilmun and even Dunoon all once part of the vast Barony of Ardkinglass and all held by younger sons of the parent stock have long since passed away, with the single exception of Dunoon which is still held by one of the old race. And though it seem but a span in the lifetime of a planet, and though the hills that keep watch, in their own unchanging silence, over the changing ownership of the glens, shall smile at the thought it seems a long time in the history of the race when we look back at the far off day when Cailein Oig first Laird of Ardkinglass with his three tall sons settled, in the place where in obedience to a predicted omen his hamper strings should snap.”